You Hear That, Elizabeth??? 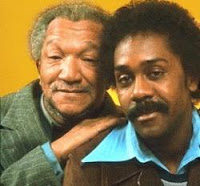 Remember the classic comedy, Sanford and Son? Sure you do. Its original run ended in the late 70's but you don't have to think back that far or even have to have been born at that time to recall it. This show, starring the late Redd Foxx (as Fred Sanford) and Demond Wilson (as his son, Lamont), still airs in daily reruns over thirty years later.
On this sitcom that Time magazine once listed as one of the 100 best television shows of all time, Fred, a 60-something-year-old widower (whose deceased wife was named Elizabeth) would often feign heart attacks when something major, unexpected, and normally unpleasant would happen. At the onset of his attacks, Fred would place one hand on his chest, stretch the other out in front of him, and while staggering around the room gasping for air, he'd say, "This is the big one. You hear that, Elizabeth? I'm comin' to join you, honey!" Oh, how many hours of laughter my generation and many generations that followed got (and still get) from watching his antics.
Well, I had my own "You hear that, Elizabeth" moment just a few days ago. Over the course of writing my first nonfiction, I Shall Not Die, I've used this blog to keep a public journal of the journey. And what a journey it has been! In my most recent posting, I talked about how I've had to "fight" every step of the way 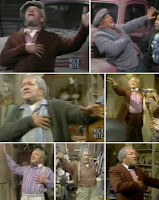 to get this God-ordered book in print and the partnering ministry (The I.S.L.A.N.D. Movement) launched. I spoke of the latest struggle just to get the book files to the printer, and nearing the close of that posting, I said that I was expecting the enemy to come back again with something else as a means of stopping the birth of this movement. Lo and behold....it happened. It was totally unexpected, and I was completely unprepared. By my measuring stick, it was the BIG ONE!
What I was expecting was a glitch with the printer or maybe an issue with the shipping or some other problem on that same level. But no. This time, it wasn't an issue with the book at all. The printer received the files that I mailed to them, they sent me a proof to approve the cover and page set-up, and as I type this blog entry, the book is in the print stage (thank you, Jesus!). So while I was expecting another problem to come from an outside source...it came from within...from a place that is very dear to my heart. People that I love, for reasons that are still not clear to me, stepped in and pulled the plug on the worship service that had been set up to commemorate the book and ministry launch. That's right...they cancelled it. I kid you not. Family members who were helping me to plan the event had donated funds to get thousands of marketing items printed to pass out and publicize the upcoming service, and because of the enemy's newest stunt, all of those dollars were flushed down the drain. Even to this day, those who stopped the program have not spoken to me to offer an explanation

for their drastic actions, but because of them, for a few days, I walked around hurt, stunned, and quite frankly, angry beyond words. Like Fred Sanford, I felt like putting my hand over my heart and staggering from the blow of it all. But when I allowed myself to calm down and I began to place it in God's hands, the Spirit spoke to me. And the words He spoke to me, I relayed to the supporter who had called to inform me of the cancellation. "This won't stop it," I told him. "God has ordered this, and if He said it, He's got to bring it to pass."
So we joined in faith and believed God to provide a ram in the bush. We rolled up our sleeves and got to work (because faith without works is dead). For the past several days, I, along with people who are in my support system, have been working tirelessly to find a new location for the worship experience. Door after door was closed in our faces. Either the contact people were not returning our calls, or the facilities were unavailable on the date we needed to use it. Finally, as I was conversing with a friend and we were brainstorming other options, I mentioned a former acquaintance in the area that used to fellowship with our church 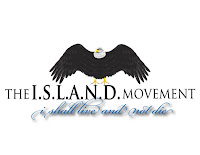 when we were both teenagers. As an adult he became a preacher and ultimately, a pastor. I asked about his church and the friend that I was speaking to informed me that he no longer lived in the area. For a moment, I felt a twinge of discouragement. And then she mentioned the name of the person who now pastored that same church. As God would orchestrate it, I knew him as well. I hadn't seen or spoken to him in years, but I used social media to send him an email, and he responded with these words: "I'd be honored to host this service at our church." Thank God for Facebook! :-)
And so, we press on. We are having to get more promo material printed, but God is still good. We didn't have to cancel or even reschedule the date of the event. The I.S.L.A.N.D. Conference is still set for October 2nd, and while I am fully aware that there is still time for more adversity to arise, I feel that the worst of it is over. And even if other things do come my way, the fact that God got me through the big one, assures me that He'll get me through anything else. He's on my side, and I'm on His, and nothing can stop us now. You hear that, Elizabeth? NOTHING!
Posted by Kendra Norman at 12:34 AM 8 comments: